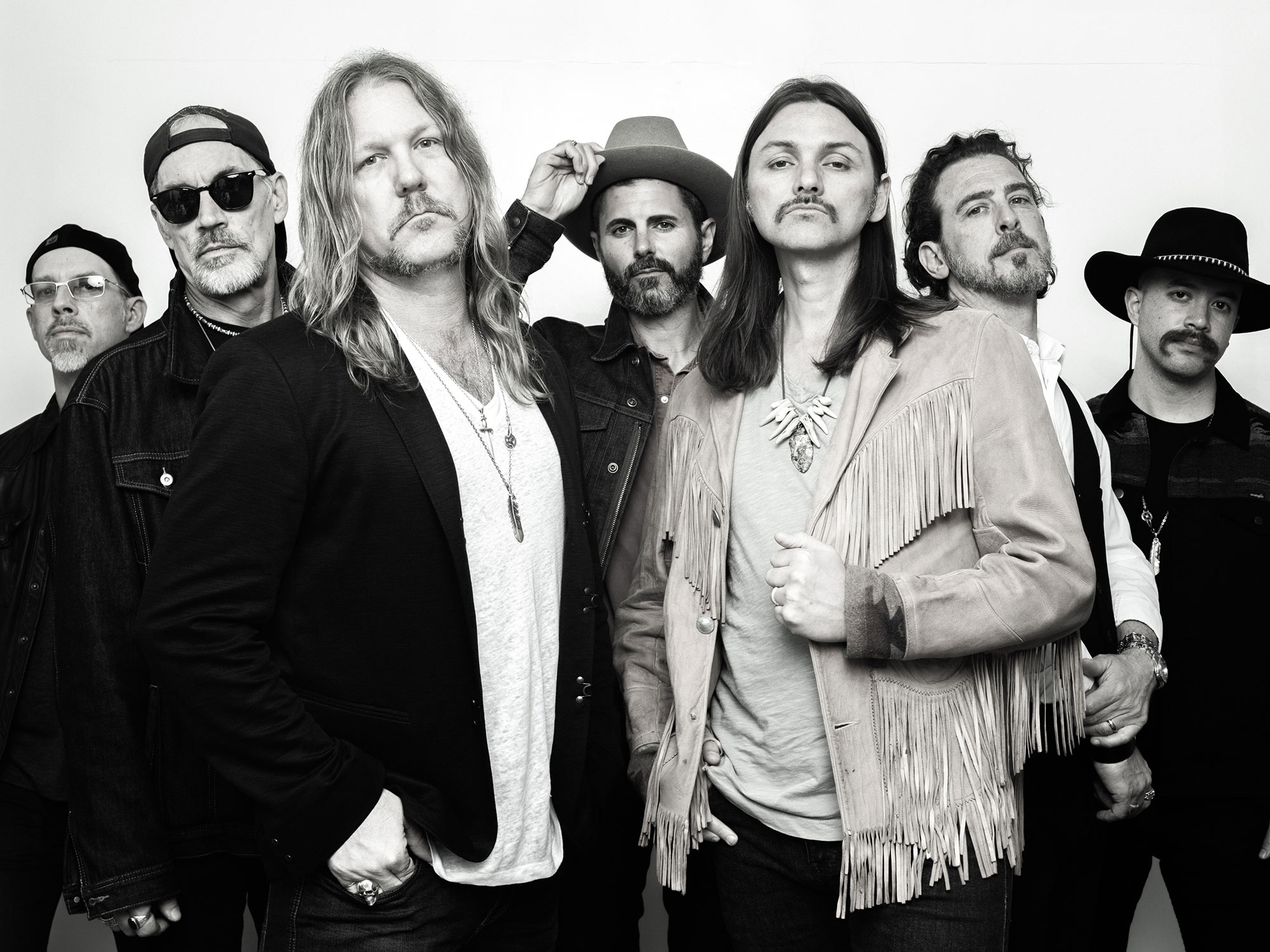 When The Allman Betts Band released Down to the River in June of 2019, the debut album represented not only the first time the group had recorded together, but, in fact, the first time the seven-piece ensemble had ever played together. If Down to the River was the sound of the band’s combustible sparks igniting, then Bless Your Heart is their bonfire, built for the summer of 2020 and beyond; a double-album follow-up fueled by road-forged camaraderie and telepathic musical intensity, vibrantly reflecting the individual and collective experiences of these seven, all drawing inspiration from the band’s symbolic hometown- a place Devon Allman calls “the United States of Americana.”

In 2019, as Down to the River topped charts and dotted playlists, The Allman Betts Band toured. Relentlessly. Sold-out U.S. theatres in spring turned to festival dates in summer, even crossing over the Atlantic for a string of European appearances. It was in Germany in late July when Allman, the group’s co-founder, guitarist, and singer, required a tour-ending hospital stay for minor, but necessary surgery. His recovery postponed several ensuing shows, but the writing for a second album enthusiastically continued.

Along with co-founder, guitarist, and singer Duane Betts, the pair already had a growing notebook of new songs, largely composed on the tour bus or in hotel rooms in cities and towns across the country: Baton Rouge, Louisiana and Tybee Island, Georgia; Chicago, Illinois and Charlotte, North Carolina, to name a few. They re-enlisted Stoll Vaughan, a singer-songwriter from Los Angeles (via Kentucky), who’d collaborated on five of River’s nine tracks, to advise on the developing material. And they booked a return to Alabama’s Muscle Shoals Sound Studio, the historic recording facility where they’d cut the debut, as well as re-signing Grammy-winning producer Matt Ross-Spang to reprise his role helming the recording.

After Allman’s healthy return and a run of fall tour dates, including the third annual Allman Family Revival (expanded from San Francisco to Denver and New York City), the group decamped to Nashville for rehearsals ahead of the recording session, fleshing out the new songs until satisfied they had reached peak performance. “We thought that if we can maximize the potential of each song, then we have a shot at making a cohesive, great record,” says Allman.

Under a siren’s warning of approaching tornados, but secure in the familiar, single-story brickhouse comfort of Muscle Shoals, the band began tracking its own brand of whirling, raucous rock-and-roll. Following a year’s worth of touring as a unit- as Allman says, the “200 races the horse had run”- the dividends were immediate and plentiful. “Now we know how the band plays. We know to trust each other’s instincts. The dynamics have a flow to them: when to step back; when to push forward,” says Allman. Adds Betts, “Once we got rolling, the floodgates opened.”

Among the fiery set is "Magnolia Road," a semi-autobiographical overview of Allman and Betts written, ironocally, by Vaughan alone, and a tie-dyed contender for summer festival favorite. There is the album's starter, "Pale Horse Rider," ominously evolving into a dark and dense rumbler accentuated by an unbridled storm of guitars, evoking the spirit of Neil Young’s Crazy Horse and modern counterpart, My Morning Jacket.

And "Ashes of My Lovers," a mourning motif of romance and wreckage, inflected with traildusted harmonica complementing the cinematic Badlands spook. Or "Airboats & Cocaine," with its tongue firmly in its cheek, telling the Southern Gothic tale of a girl born into the wrong family and her guy regretting his incidental associations with the underbelly of swampland contraband, wrapped up in a loose, mid-tempo stinger.

Over a week’s time, they recorded 13 songs, with additional tracking in Memphis and St. Louis. Within the eclectic repertoire are the familiar: stacks of guitars; electric, acoustic, and slide; a throttling, percussive rhythm section. And the fresh: Bassist and singer Berry Duane Oakley’s ABB vocal debut on his original song (“The Doctor’s Daughter”); Allman’s baritone vocal channeling Johnny Cash (“Much Obliged”); Betts extending the legendary family legacy of incendiary instrumentals “Savannah’s Dream”). They tapped friends, as well, such as Jimmy Hall, Shannon McNally, Art Edmaiston, Susan Marshall, and Reba Russell for guest contributions. Then, emerged with an undeniable achievement of an album (what sophomore jinx?) worthy of its winking, unabashedly Southern title.

“I think we definitely challenged ourselves, pushed ourselves artistically, and widened the spectrum on all levels. We wanted something that was a little more sweeping. A deeper experience,” says Betts.

Says Allman, “I hope what people hear on Bless Your Heart is a band that’s having a love affair with being a band.”

For guitarist and singer-songwriter Jackson Stokes, great musicians make great neighbors. Even as a youth weaned on classic rock- his first concert was Lynyrd Skynard- Stokes was unaware that living across the street from his St. Louis home was guitarist and singer-songwriter Devon Allman. Allman's family tree is impressive as the son of Gregg Allman and nephew of Duane Allman of Allman Brothers Band fame. Yet, Stokes knew little of the legendary group. Encouraged by his father, and holding his guitar, the 11-year-old Stokes knocked on Allman's door.

Allman, two decades his elder, heard something special in the young Stokes and encouraged him to continue learning and growing as a musician. In May of 2019, Stokes put the finishing touches on a striking inagural effort. Produced by Allman, it is a lean and focused set of rock-and-soul, including an ambitious Talking Heads cover, and a depth of original material ranging in style and subjects. From the Memphis stroll of the opening "Can't Getcha Out," through the reflective acoustic closer, "Take Me Home", the debut encompasses Stokes' wide swath of influnces and tastes. There's the '60s R&B update that morphs into modern rock on "Slave", the staggering punches of overdriven guitar on "Time is Now," and the midnight seduction of "Contents Under Presure." A flourish of pleasing guitars finishes the slowly climbing blues-rock centerpiece, "You and Your Partner," while David Byrne meets Southern funky on "Life in Wartime." As well, Stokes welcome the sunny-days slide guitar of The Allman Betts Band's Johnny Stachela to brighten the Southern sway of "Sins are Forgiven," complementing that with the chunky Saturday night blues of "Whiskey."

"I really do enjoy playing guitar, but I also love songwriting. I love the whole process" says Stokes. "I think this album is very representative of a natural maturation, of how I've been viewing things on my journet. And, hopefully, it's a journey that's just beginning." 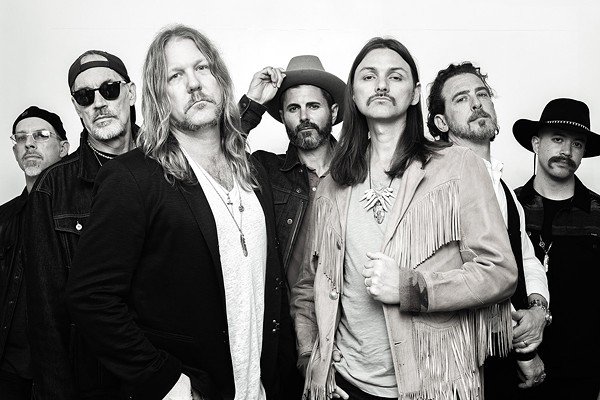 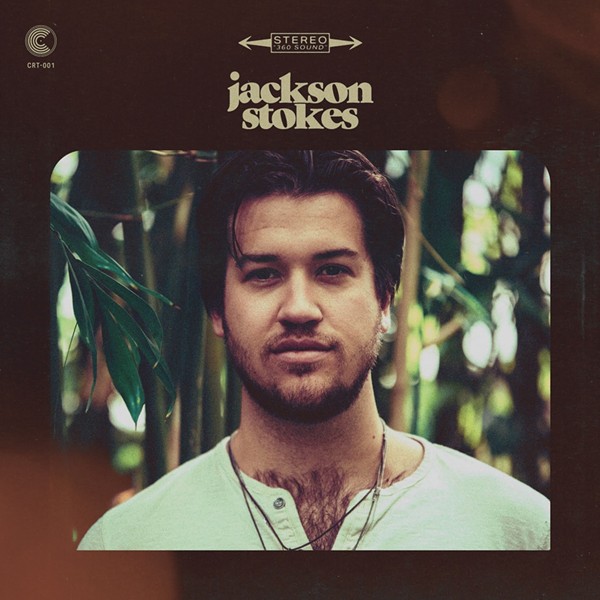